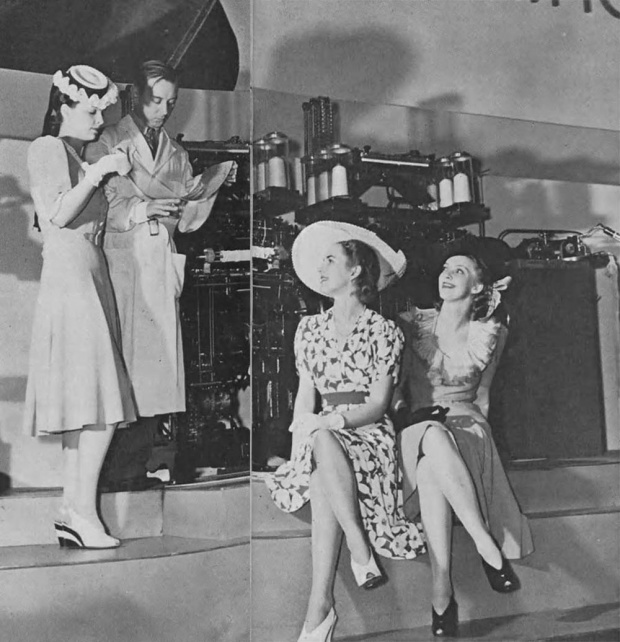 The 1939 World’s Fair sat on the brink of disaster… WWII was right around the corner and the attractions were a delightful distraction. People were obsessed with the future:
Trylon and Perisphere.
And there was color photography, something many hadn’t seen.
And a transparent car…a Pontiac Deluxe Six, clad in Plexiglas
And a parachute Jump….that ended up at Coney Island.
And Elektor the robot who could toss insults and smoke cigarettes.
But the big news….Nylon Stockings! Following a low key public demonstration at the Golden Gate Expo in San Francisco February 18th 1939, DuPont went all out at the New York Worlds Fair in April in April, touting Nylon as a new wonder synthetic fiber made of “carbon, water and air.” The Nylon stockings show caused a sensation!
Women loved them right away but once the U.S. entered the war nylon had to be saved for the war effort. By 1942, Nylon stockings were in short supply; however, when American servicemen arrived in Britain, their kit bags were filled with Nylon hosiery. Many an English girls heart was won over by a pair of nylon stockings.
Here’s a quiz. Can you name the NYC based group that sang a song called “Nylon Stockings“?
Facebook Comments Box